So, what really did come first – the chicken or the egg?

Regardless of the answer, eggs are a definite bonus of welcoming chickens into your family. It’s not every day you find a pet that delivers one of nature’s most complete foods, full of essential amino acids, vitamins and minerals.

Eggs are an incubation chamber for a developing chick. They contain everything a chick needs during the three-week incubation period and the first couple of days after it has hatched. This is why eggs are packed full of nutrients. 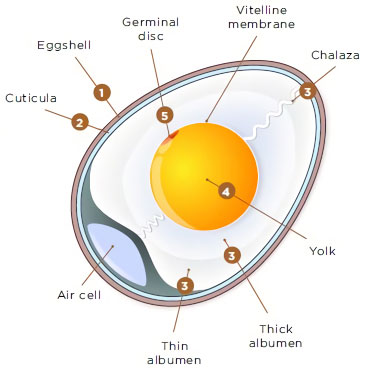 It takes about 24 hours for a hen to make and lay an egg.

After the yolk is produced in the ovary, it’s released into the oviduct. If the hen has mated with a rooster, this is when fertilisation hopefully happens. If not, the egg stays unfertilised. As it continues down the oviduct, the egg white is laid down, then the shell. A double yolk egg is the result of multiple ovulations in a short amount of time. These yolks travel down the oviduct together and become encased in the same shell.

Egg shells are flexible to begin with, before quickly hardening once the egg has been laid. The shell itself can be white, brown or cream, depending on the breed of chicken.

And have you ever wondered why an egg is the shape it is? This pinched oval shape is no accident. This shape is one of the one of the strongest architectural forms, spreading weight and pressure equally across the entire egg. And, secondly, it’s the easiest shape for hens to lay, which is a big plus when you’re laying up to 300 eggs annually.

How to keep eggs fresh

The best way to keep eggs fresh is to collect them as soon as they’ve been laid and popping them straight in the fridge. Generally-speaking, as much freshness is lost in 3 days at room temperature as 3 weeks in the fridge.

You can test how fresh an egg is by popping it in a bowl of water?

Fresh eggs will sink to the bottom, while older eggs will float to the top.

It is strongly recommended that you don’t wash your eggs due to the fact their shells are porous and washing them could allow harmful bacterial inside, creating a food poisoning risk – yuck! If an egg does get a little dirty, simply brush it with a clean, dry, abrasive cloth in a gentle rubbing motion.

This can be the result of small blood vessels rupturing when the egg passes through the oviduct, especially in younger hens. Subsequent eggs should be blood-free. However, blood-stained shells can also indicate cannibalism, so check each chicken for possible injury near its vent (bottom).

Blood in the yolk

Blood in an egg yolk is harmless and easily removed. When a yolk is released from its follicle in the ovary, a tiny blood vessel may be torn, releasing some blood into the forming egg. Expect increased blood spotting from young hens coming into lay.

Carotenoids are the natural pigments behind orange and yellow fruit and vegetables – and egg yolks. So, the more of these foods in your chooks’ diet, the brighter your yolks. But although they look extra delicious, golden yolks are actually no more nutritious than lighter ones.

Yippee – you’ve struck gold with a double-yolker! A double (sometimes triple) yolk is the result of multiple ovulations in a short space of time. The resulting yolks make the trip down the oviduct together and become enclosed in the same shell. Young laying hens are the biggest producers of double-yolkers.

The texture of an egg white (or ‘albumen’) can vary from sitting high and close to the yolk (what you want) to being thin and runny (what you don’t really want). Fresh eggs normally have a firmer white. And older hens generally produce runnier whites. Watery whites can also be the result of a diet lacking in key nutrients, such as protein.

Meat spots in the egg white

Meat spots are pieces of egg white left behind from the making of the last egg, or sometimes fragments from the oviduct lining. Again harmless and easily removed, meat spots can be pigmented or non-pigmented.